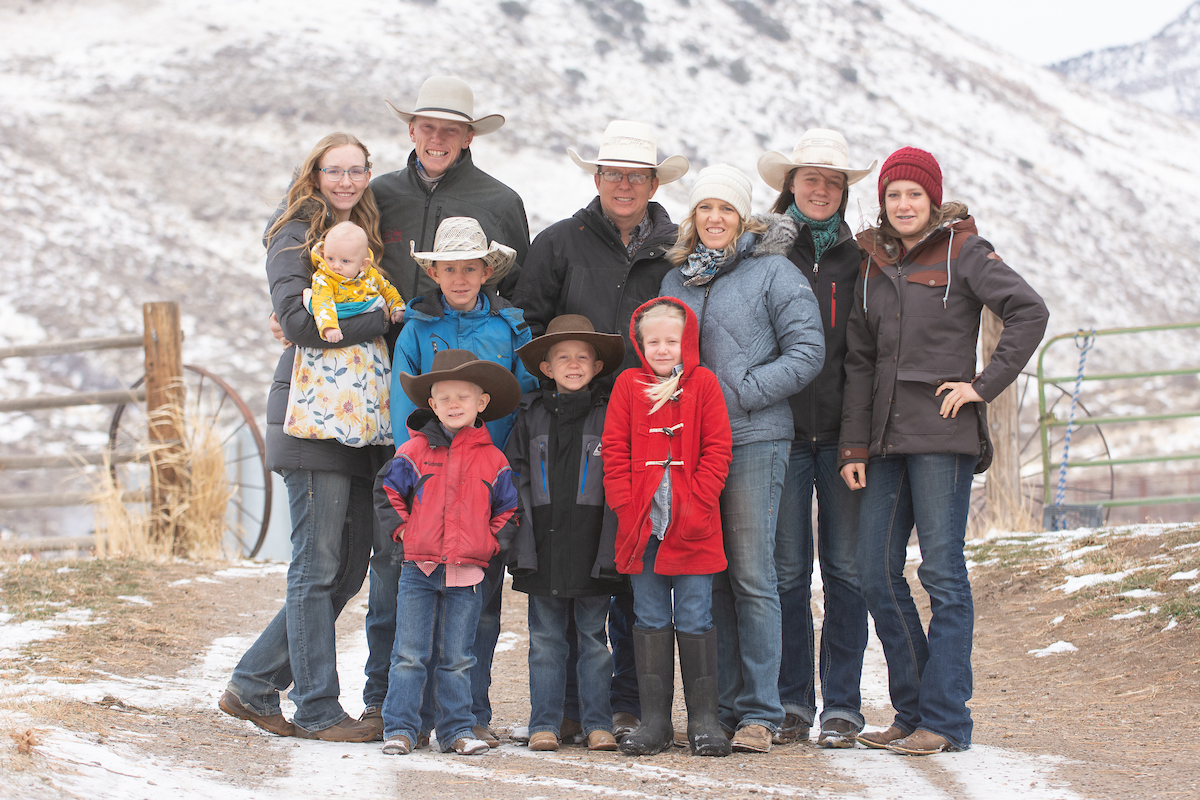 In the 1940s, the Sorensen family planted roots in Nevada, raising thousands of sheep and some cattle on a ranch where the Ruby and East Humboldt mountain ranges meet in the northeastern corner of the state. Their descendents are still there.

Third-generation Nevada rancher Jared Sorensen and his wife Selena are raising their family of nine children, who play important roles on the Secret Pass Ranch, where winter winds are unforgiving and a blanket of snow glimmers across the region. Encompassing 10,000 acres (and an additional 12,000 acres the Sorensens lease for grazing), it sits between the mountain ranges, the valley opening up to vast fields where cattle graze. The Sorensen home, an unassuming 100-year-old house, is mostly hidden from the highway by trees. Across the way at the foot of the Ruby Mountains, a stream flows along the highway.

More than eight decades since their ancestors first set foot on the ranch, the couple is now leading their family in a different direction from past generations with regenerative ranching — a concept designed to take into account the effects of climate change while working to ensure the longevity of not only their family and ranch, but the surrounding environment.

In 2019, Jared and Selena enrolled in the Nevada Conservation Credit System, a program that offers incentives for habitat protection for Greater sage-grouse, a large bird found throughout eastern Nevada and other Mountain West states. The bird has a round body and long tail, which males spread into a starburst, similar to a peacock. Males are also known for an elaborate courtship ritual that includes flaunting distinct yellow air sacs on their chest to attract female mates.

The Greater sage-grouse has a declining population and has teetered on the brink of being classified as an endangered species — a listing that would substantially limit development in rural Nevada and across the West.

The Legislature appropriated funds to kickstart the credit program in 2015. Mining, energy and development companies buy credits from ranchers and farmers participating in the conservation program, who then reimburse the state for the seed funding it provides.

As of last summer, the Secret Pass Ranch has conserved more than 10,000 acres, earning 3,642 conservation credits. Overall, the program has resulted in approximately 44,537 credits and nearly 120,000 acres conserved, according to a June 2021 state report.

And though the ranch is not certified organic (despite being managed according to the standards), it became one of 160 sites in the world to be certified as regenerative agriculture in 2020 through the Savory Institute, a nonprofit organization aimed at facilitating “holistic management.” That term describes a farming approach focused on the health and regeneration of soil, which is expected to improve biodiversity, the water cycle and overall health of the environment.

“It’s an outcomes-based program, whereby through third-party monitoring, you are improving the health of the land and soil consistently over time,” Jared said. “It’s not necessarily as restrictive as organic [standards], but in my mind, it’s more meaningful because a lot of organic producers, they’re just after the label and the increased market share and profitability that it provides.”

What it means to be a regenerative rancher

Jared said his family’s ranching style makes them outliers in Elko County, as regenerative ranching and farming approaches are not widespread in the U.S. He said the journey to managing his ranch according to “holistic management” standards began in 2002 when he attended a class at the Wyoming Ranching for Profit School, a business school for the livestock industry.

Ranchers are good at managing grass and cattle, he said, but the course taught him to look deeper and reflect about how ranching methods can leave consequences for generations to come.

“You realize, for one, how insignificant we are because we’re just a flash in the pan,” Jared said. “Doing the wrong thing for years and years, or even through one season, it can take years or decades to reverse that.”

He used erosion as an example. If there’s not enough vegetation to hold the soil in place, a flood event could cause the loss of topsoil, which can take a century to rebuild on its own.

A decade ago, this type of ranching and farming style was “fringy,” Jared said, but it’s becoming more mainstream. Small changes, such as leaving trees in riparian areas along creeks and streams instead of removing them as in past generations, are slowly healing the water cycle, he added.

Another change in management includes moving the cattle on the ranch more frequently in order to let plants recover.

“We’re seeing the willows come back, the shrubs come back,” Jared said. “We’re seeing that there’s more fish and the beaver will come back. And that’s our keystone species that we look at … When beaver come back into the landscape, then you reach a threshold where it’s really sustainable because they’re going to be creating these huge wetlands.”

The dams beavers build help hold water on the landscape, which can help make the ranching area more resilient to drought. Other ranchers may not see beavers in such a positive light, as they can plug up irrigation ditches and hold back water from flowing to their fields. But he thinks removing them is a mistake.

“It’s like killing the goose that lays the golden egg,” Jared said.

He’s doing things differently than his father and grandfather. They believed that if it wasn’t grass, it didn’t belong, so they routinely removed trees from riparian areas. But he doesn’t fault them. They were working with the knowledge available to them at the time.

After spending decades learning about regenerative ranching and gaining a new understanding, Jared and Selena are working to impart it to those off the ranch as well. They’ve embarked on a campaign to educate potential consumers about the food they eat and market their own grass-fed beef, which they began selling six years ago through their business, Ruby Mountain Foods.

“What are they doing?” Selena said, referring to the people and companies behind the food labels in grocery store items. “What are they passionate about? What’s their end result? It is just a company that’s going for the dollar, or is it a family who is committed to making things work, not just for their ranch, but for the people they’re serving?”

That’s become an additional challenge for the family.

“We were born ranchers, we like to cowboy, then we turned into wanting to learn about the soils and then wanting to improve the health of our family,” Selena said. “And now we have to become marketing experts.”

In line with their education efforts, the Sorensens started opening their ranch to interns in 2020.

But interns aren’t the only ones learning the ropes on the ranch. First and foremost, it’s their children, who each have a role in the daily work to be done. They each get paid $100 for every year they age. By 12, they will have earned $1,200.

Besides helping with daily chores, Jared and Selena said they wanted to foster a sense of independence in their children. Justin, the oldest of the nine, had chickens by age 5 and sold eggs to neighbors. He started buying his own horses at 13 and soon had a small herd of his own cows.

“We know that because we’re helping the ranch thrive, we’re going to hopefully have a home here forever,” he said.

The work ethic required for working on a ranch helps teach Justin and his siblings about responsibility and consequences, Jared said.

“It’s different when it’s an animal that needs to be fed or it’s going to die,” he said.

Losing one of their own cattle “does something to them and makes them think on a different level,” Selena added.

Justin recently married and started a family of his own, welcoming his first child, but still lives on the ranch with his parents and siblings. He said he’s leaning on the lifestyle and family unity his parents have modeled for him in raising his own family.

“I want to give that same opportunity to my kids to pursue what they love and help them achieve their goals, whatever those may be,” he said. “Whether they’re on the ranch or if [my daughter] Mason wants to go and be a ballerina, we’ll help her with that, too, whatever her goals and dreams are.”

While Jared and Selena don’t expect all their children to remain on the ranch, they work collaboratively so the children enjoy the work they do and might choose to stay.

The ranch is a launchpad, Jared said, for what their children choose to pursue.

“We believe in the principle of abundance and we believe you can raise multiple families on a landscape, but we can’t expect the cows to pay for everyone’s house and car payment and insurance,” Jared said. “So if you want to come back, bring your own enterprise back to the ranch, and we can use the land base. And instead of dividing, we’re just adding and hopefully multiplying what we have here.”

“Hopefully they’ll, just like we did, take what our parents and grandparents did and refine it and build upon it,” Jared said.