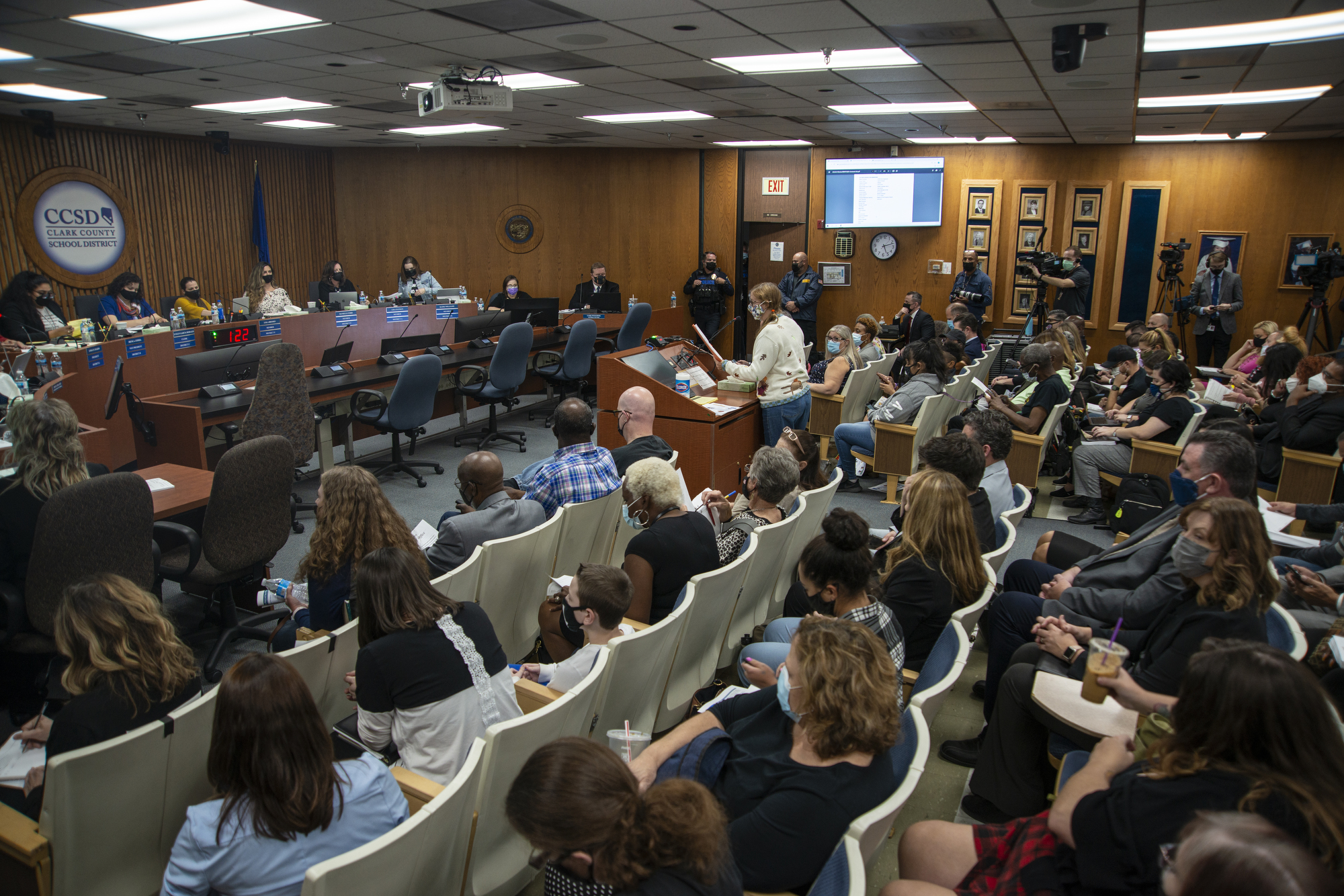 When school trustees gathered in Lake Tahoe the past three days for an annual conference, they encountered sessions about understanding their roles and maintaining their emotional health.

They’re topics fit for 2021, a year that has seen political divisions and public vitriol concerning mask mandates, COVID-19 vaccines and anti-racism policies take center stage in school board meetings. The theme of the Nevada Association of School Boards' gathering this year: “Elevate Education.”

“I think it will be a healing time for them,” Debb Oliver, executive director of NASB, said last week.

That’s especially needed in the Clark County School District, home to the vast majority of Nevada students. In late October, amid the backdrop of those other issues playing out locally and nationally, a fractured Clark County School Board of Trustees fired Superintendent Jesus Jara. The move thrilled some in the community who considered Jara an inept leader incapable of improving schools’ climates and students’ academic prospects. To others, the decision represented a gross overstep and miscalculation by the four trustees — Linda Cavazos, Lisa Guzman, Danielle Ford and Irene Cepeda — whose votes ousted him.

In any case, the decision further inflamed tensions and set off more mudslinging, creating a dramatic public spectacle. Since the controversial termination vote:

Social media, meanwhile, became the battleground of verbal assaults among trustees and community members weighing in on the controversy. It was enough to make Nicki Klein-Richter, a former teacher in the district whose son is a senior at Green Valley High School, cringe and wish all involved would “put their swords down.”

“We look like an embarrassment to the rest of the nation right now,” she said. “I say keep your politics in your pocket. Leave it at the door.”

The word bandied about in relation to the Clark County School District leadership tug-of-war is dysfunction. But reaching this point wasn’t an overnight phenomenon, just as there is no overnight fix. A mix of education leaders, former trustees and external observers point to longstanding problems plaguing the 310,000-student district coupled with a foggy vision, poor communication, national political discord and an ongoing pandemic as the recipe for continued turmoil.

As leader of the state school board association, Oliver has seen her fair share of troubled board situations this year.

In August, the Elko County School Board found itself down to two members after five resignations. It occurred during a period marked by mask mandate hostility. Further west, the Washoe County School Board considered censuring one of its own members — Trustee Jeff Church, an outspoken critic of the district and various policies who has been accused of spreading misinformation — but tabled the vote last month.

That minutiae could be perceived as micromanagement, or what others refer to as meddling in operational details. It’s not a new problem, though.

“We had trustees telling facility staff what color they should paint a school,” said Carolyn Edwards, a former trustee whose three-term run drew to a close at the end of 2018. “It was ridiculous.”

The board received training from Thomas Alsbury, a consultant who authored a book called “Improving school board effectiveness: A Balanced Governance approach," in 2017 and again starting last year. As stated prominently on his website, “Balance governance is an approach that discourages micromanagement of the superintendent and district staff while setting out a constructive role for the school board in monitoring student outcomes more deeply.”

Balanced governance, while perhaps slightly less restrictive than the board’s prior policy approach, essentially spells out what oversight of the superintendent should look like. Despite hours upon hours of training, board members don’t always adhere to its practices, which has become a point of frustration for Trustee Lola Brooks, who has come to be viewed as the enforcer of governing rules.

“Part of the board thinks that we should, as a board, do whatever we want,” she said. “I’m sure there’s lot of people who would like to step into this role and will promise us the moon and the stars, but it actually doesn’t work like that.”

For all the talk about a governance approach — a topic that can make meeting attendees’ eyes glaze over — it only exists if trustees agree and adhere to it, Edwards said. In other words, there’s not a lot of teeth behind it.

Still, Edwards said the superintendent likely bears some responsibility in the communication missteps that led to his lack of rapport with board members.

“It’s never a one-way street,” she said. “If your board president and your superintendent can’t even talk to each other, boy is that a red flag for huge problems going on.”

The board’s management style isn’t the only one under scrutiny. Stephen Augspurger, executive director of the Clark County Association of School Administrator and Professional-Technical Employees, said Jara’s decision-making habits are “incompatible” with a state law mandating the reorganization of the school district. The 2017 law known as AB469 shifted more autonomy to principals and school communities in a bid to improve student success.

The dramatic overhaul of the district’s organizational structure produced litigation, logistical headaches, lengthy public meetings, animosity between district leaders and state lawmakers and, in some circles, hope for a brighter future. While some principals embraced the concept, others simply followed the new requirements, such as forming school organizational teams made up of school staff and parents.

Now, “reorganization” is nowhere near the buzzword it used to be in school board meetings, and it can be difficult, if not impossible, to find information about school organizational teams on certain school websites. Some of Jara’s decisions even deviated from the reorganization law, giving fuel to his critics who complained about a top-down leadership style.

“He is a centralized kind of leader,” Augspurger said. “He wants to call the shots. He wants to make the decision.”

Former Trustee Deanna Wright, who reached her term limit last year, said the beefs surrounding Jara’s management style and AB469 echo what board members warned might happen years ago. The law provides autonomy, she said, but not to the point of schools operating as islands outside of the Clark County School District purview.

“That was what he was fighting,” Wright said, referring to Jara.

Right or wrong, the reorganization debate runs deeper than Jara, pitting various stakeholders against each other in a long-simmering dispute. And, ultimately, it’s not as visible or easily describable as the problems students, parents and employees see day in and day out: staff shortages, overcrowded classrooms, transportation hiccups and public feuds playing out in school board meeting rooms.

Nicki Klein-Richter felt like she was being asked to do “700 things that had nothing to do with the classroom,” eroding her love for her 26-year teaching career. Last December, after four years working for the Clark County School District, she resigned from teaching Spanish at Foothill High School. Her decision wasn’t about her students or her principal or her colleagues.

It boiled down to increasing paperwork and demands coming from higher up in the district.

“It seems like they’re so far removed from the actualities of what takes place on a day-to-day basis that they’re kind of hovering like a drone above all these schools,” she said. “No one is really listening to these teachers that are crying for help.”

Klein-Richter said she wrote to Jara several times, both in English and Spanish, outlining her concerns. Nothing changed. Now, she’s watching from afar, relieved her son is about to graduate and sad about the constant fighting but under way less stress at her new job in the nonprofit sector. In her ideal world, the superintendent would have more recent classroom experience and the trustees would be parents or former educators.

“Is it going to happen?” she mused. “Probably not.”

Machelle Rasmussen, a social studies teacher at Kenny C. Guinn Middle School, is sticking it out but worries about the attrition problem. She said an English teacher recently resigned and her school has other vacant positions as well. The drama between the trustees and superintendent hasn’t helped the school environment, she said, because it’s another divisive topic that tends to separate people into camps.

As a teacher and mother of four children in the district, Rasmussen said she is tired of the platitudes about helping students. She doesn’t see it happening and can’t imagine how rescinding Jara’s termination would improve the situation.

“I think we need to move forward,” Rasmussen said, adding that she would like to see a coalition of parents, teachers, administrators and support staff emerge to define what the community needs from a superintendent and trustees.

Sara George, a parent of two daughters who attend Josh Stevens Elementary School, feels torn about the leadership jam: On one hand, she isn’t opposed to letting Jara finish the remainder of his contract (which, before the termination vote, ran through Jan. 15, 2023), but on the other, she wonders if the district should clean house.

She’s already rethinking how she may vote in next year’s election. The trustee seats currently occupied by Cavazos, Ford and Cepeda will be up for grabs. It’s unclear whether they plan to seek reelection.

“Everybody is bad right now,” George said. “‘The board is spending too much time just pointing fingers at each other and Dr. Jara.”

The agenda posted for the Nov. 18 board meeting hints at all the possibilities on the table: Trustees will consider whether to take another vote on Jara’s employment and if that motion passes, they can proceed to an actual reconsideration vote. If his termination stands, they will again discuss the process or appointment of an interim superintendent. A separate agenda item poses the question of whether an outside excerpt should investigate Jara’s allegations of a hostile work environment.

During her press conference Monday, Cavazos said each board member would need to do “self-reflection” if the superintendent’s termination is overturned and he remains.

“It’s going to have to be, what do we need to do so that, again, we’re not here talking about allegations,” she said. “We’re talking about achievement, accessibility, accountability and accomplishment for our children.”

But is repaired community trust and mended relationships among district leaders wishful thinking?

The head of the Nevada Association of School Boards doesn’t think so. Oliver sees progress happening in Elko County, where four new trustees have been appointed and the board is returning to regular business.

“It does happen. It can occur,” she said. “I’m looking at Clark with hope.”

Update: Nov. 15, 2021. The story was updated to clarify when the training with Thomas Alsbury occurred.