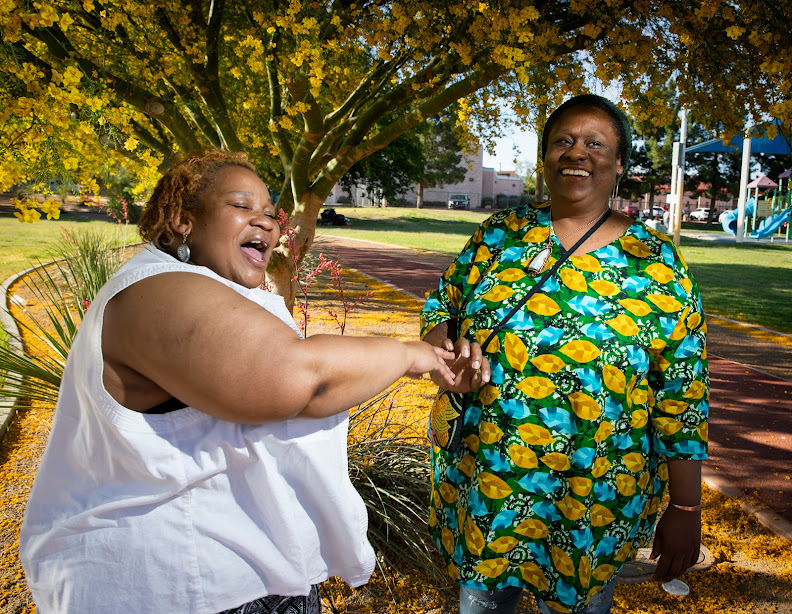 When police stopped Asha “Champagne” Clark last September, she said she was driving with a suspended license, no registration and drug paraphernalia. Clark received a citation, which later went into warrant status because she missed court.

“I didn't have the money to pay. So guess what? Asha didn't show up to court,” Clark said. “I’m traumatized. I don't want to go to jail.”

She was later detained in April. Clark said at 42 years old – now a grandmother – she feared going back to prison, so she called the Mass Liberation Project of Las Vegas and they bailed her out in three days. She is the first person bailed out this year as part of the organization’s 2022 Black Mama Bail Out program, which aims to free local Black moms from jail before Mother’s Day.

The effort aligns with a national abolitionist movement started by former co-director of Southerners on New Ground or SONG, Mary Hooks, that brought organizations together to bail out Black mothers and caregivers as a way to interrogate the function of pretrial detention.

“We are bailing people out, we are throwing homecomings to welcome our people home,” said Hooks in a 2018 interview with Democracy Now. “We are unifying people with their families and also helping to provide stabilization because we know that once people sit in a cage for so long, there's so much that has been lost.”

Hooks does not believe the cash bail system is legitimate and she said it is built on access to wealth, which causes impoverished people to languish away in jail. She said whether someone shows up to court should not be determined by their ability to pay a bail fee.

Prisons and jails have long existed in society — for centuries as underground cells, claustrophobic tunnels and the modern institutions of today —  yet prison abolitionists insist they are unnatural and that other alternatives to punishment should be used.

“I believe in abolishing prisons, and I feel like that is an attainable goal,” said Leslie Turner, racial justice advocate and lead organizer for Mass Liberation. “I think we've just lost our ability to imagine something different.”

Mass Liberation Project of Las Vegas is a nonprofit that proposes policies to interrupt criminalization, such as the school-to-prison pipeline in Nevada, with the goal to disrupt violence that occurs in the community by connecting Black youth to their origins. Turner said Mass Liberation is built on love and rigor, with a mutual-aid approach that holds the people they help accountable for changing their lives.

Last year, Mass Liberation bailed out every Black mother detained in Las Vegas city and county jails in time for Mother’s Day, spending $90,000 to help reunite 27 moms with their families.

“What it's about is creating community-centered solutions and interventions that are not based on punishment,” Turner said.

When someone comes to Mass Liberation with an open case, the group helps through participatory defense or organizing in the courtroom, sometimes in conjunction with public defenders and attorneys. Turner said the process can include securing a job for a defendant, conducting community safety plans, building social biographies to humanize clients or providing access to mental health services, and presenting findings to the judge.

In 2018, Mass Liberation tried to bail out Clark for the first time during its inaugural Black Mama Bail Out campaign, but was unable to do so because the judge put a hold on her and sentenced her to 90 days in custody. The group supported Clark financially to help her with phone calls and food. They also picked her up upon her release.

At the time, Clark said she had been working for six months and trying to become self-sufficient but was soon derailed by warrants.

“I would knock one mountain down just to climb another hill,” Clark said. “So I got a job … I’m trying to pay my fine once a month … then [a fine] that I forgot about way back in 2014 came up.”

During her incarceration, Clark lost her apartment and everything in it but retained her job, which she said is not typical. Even with her job intact, she felt as if she was starting her life over.

In and out of state custody since she was a teenager in foster care and group homes, Clark said she started to internalize her experiences and see herself as someone who could never move beyond a life of criminality and incarceration.

“How am I supposed to redefine my future, if I keep being judged by my past?” she said.

That’s where Mass Liberation has come to her aid. Clark has joined the group as an organizer and said she gained a newfound sense of determination and confidence about being a productive member of society, regardless of her arrest record. She helps organize community events and initiatives, and has attended national conferences with Mass Liberation that are organized by formerly incarcerated women.

Clark said her involvement with the organization is even helping break a generational curse. She said her son, 24, was following in her footsteps of being in and out of jail — which is a pattern she witnessed among adults in her childhood — but now he has a steady job and even recently secured a promotion.

“Sometimes you do need that extra push or somebody to support you, and I have learned that,” Clark said. “I feel like I'm a better person because of the support that I have from them.”

Freeing women from jail is one of Mass Liberation’s goals, but Turner said success is ultimately measured by whether the aided women join the organization and get involved in the work to reform the justice system, and change their lives and communities.

The biggest challenge to bailing mothers out is getting consent, which can take the help of corrections staff. Turner said during the group’s bail-out process, moms learn that they must commit to transforming their lives with support from the organization.

Besides recycling returned bail money to bail out more people, Mass Liberation helps members with groceries, bills, and car and home repairs, including fixing air conditioners. Turner said the group pours aid into the community through a multi-layered approach and that she expects reciprocity from members through changed behavior.

Turner said it can be difficult for Black people to change their behavior because of mental conditioning “through white supremacy”, disrupting self-identity. She said this calls for the Black community to realign with African traditions and values for psychological healing.

“Yes, the [justice] system is illegitimate and guilty as hell – and also we have internal work that we have to do as Black people,” she said.

Reducing the use of cash bail in Nevada

People can sometimes remain behind bars because of the inability to meet a cash-bail requirement and not because they are a danger to society – which it has been argued systematically oppresses low-income individuals and complicates justice reform.

According to equity researchers, in 2020, 90 percent of Americans who were in jail because of an unpaid bail were living in poverty. This system that keeps low-income individuals with low-level charges in jail disproportionately affects people of color — and then they miss work, lose their jobs and homes, and are sent further into poverty.

“That's what people don't understand,” Clark said. “You can lose your whole [livelihood] in two weeks just by being locked up.”

In 2019, Mass Liberation introduced a bill at the Legislature to end cash bail, but it died quickly. Turner said she believes the measure — along with the group’s five-year history of playing a role in the National Bail Out collective — inspired the landmark Valdez-Jimenez decision at the Nevada Supreme Court in April 2020. The decision placed the burden of proof for cash bail on the state, and the resulting default is that people will be released unless the state can prove why they should be detained. It also declares that judges must take defendants' financial status into consideration when setting a bail amount.

As a result of that case and work being done by organizations like Mass Liberation, Turner said she is expecting to see fewer moms in jail this year because they’re being released on their own recognizance.

“The state now has to prove why you want this person in jail,” Turner said. “And that's because of our work … freeing Black mamas from cages.”

During the 2020 Black Mama Bail Out, Turner said they bailed out every Black woman who was jailed and that the majority of them were detained because of unpaid traffic tickets. She said every woman bailed out of the City of Las Vegas jail was detained for a traffic violation.

Turner added that the group did not have time to verify who was a mother or not, and bailed out every Black woman in custody for Mother’s Day.

“Even if they're not a mama, they have a mama,” Turner said.

Last year, state lawmakers passed and Gov. Steve Sisolak signed into law AB116, which downgrades certain minor traffic violations to civil infractions. Decriminalizing traffic tickets was a 10-year policy fight in Nevada, and Turner said learning that nearly every Black woman in jail was there for a traffic violation was “unreal” and a cause for serious concern.

The decriminalization of traffic tickets, Turner said, “is an example of how freeing Black women leads to the freedom of everybody.”