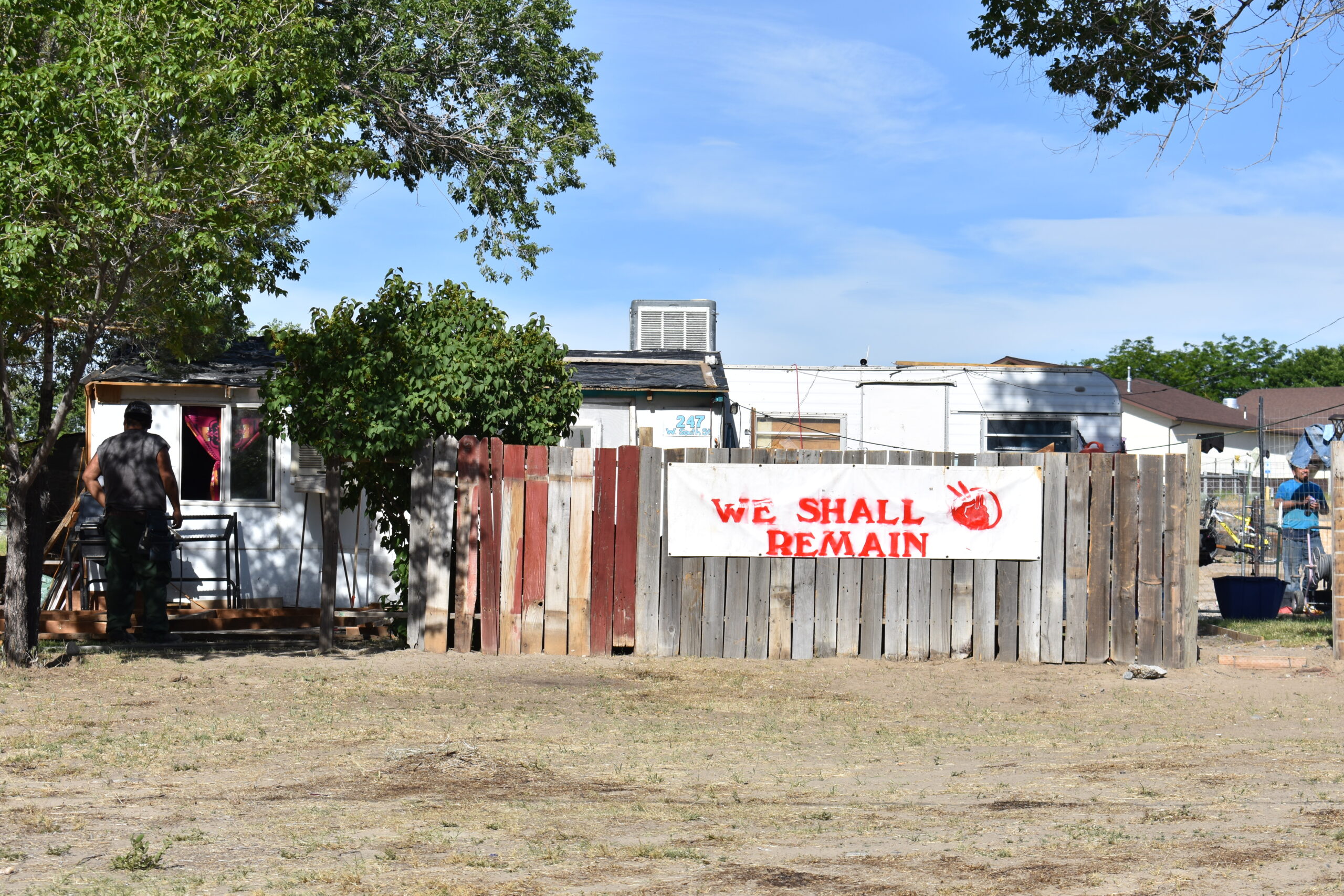 Editor’s note: This report is part of a collaboration between KUNR and The Nevada Independent. This story was updated on Feb. 8 at 4:00 p.m. to include recent legal developments at the colony, including the arrest of one of the land protectors featured in this story.

The cold December air in Northern Nevada cuts deep. Near a community bonfire on the Winnemucca Indian Colony, Nenookaasi, who preferred to share her Indian name, leans forward, absorbing warmth from the flames.

Snow blankets the ground, trailer homes and nearby tents. Usually, the mountains dominate the horizon, but with the snowfall, it’s challenging to tell where the mountains end and the clouds begin.

Nenookaasi’s friend Teehwanee sits next to her in a camp chair. He’s bundled up in winter overalls, a puffy jacket and a warm beanie. There are a few open seats nearby, but everyone else is off doing chores around the colony, visiting with elders, or in their tents. Occasionally, a few friends stop by to chat.

Prompted by social media posts highlighting the Winnemucca Indian Colony council’s attempts to bulldoze the homes of many of the colony’s elderly residents, Teehwanee, Nenookaasi and a few other companions drove more than six hours last November to help close to a dozen residents living in the colony. The two have been there ever since, serving as what residents are calling “land protectors.”

The residents are locked in a legal battle with the colony council after council members issued eviction notices and ordered property destruction. Colony leaders say the moves are necessary to clean up the neighborhood. Residents call it a thinly-veiled effort to remove them from their homes.

“The way we're raised, you know, is that we respect our elders,” Nenookaasi said. “We take care of our elders, and to see elders over here getting treated this way — it hurts.”

Sometimes, taking care of elders means standing in the way of bulldozers or preventing new construction from taking place on the lots of homes that have already been bulldozed. For Nenookaasi and Teehwanee, it also means sharing space with — and most importantly — listening to and abiding by the elders’ wishes. Teehwanee is worried about what will happen if he and the other people supporting colony residents leave.

The colony consists of a little more than 300 acres on the outskirts of Winnemucca. It includes a 20-acre residentially zoned settlement where colony residents and others who have shown up to side with the elders reside.

The ongoing legal battles are part of a decades-long fight involving the Bureau of Indian Affairs, the tribal council and colony residents. Disagreements over who is a valid member of the council and thus has authority over the land date back to the 1916 census and then-President Woodrow Wilson’s decision to grant a 320-acre parcel of land to Paiute and Shoshone Native Americans without land or a home.

In the 1970s, tribal members created a Constitution and bylaws for the colony, establishing that membership is based on two main factors: whether a person is a descendant of someone listed in the colony’s 1916 census, and whether they are at least a quarter Paiute or Shoshone.

Almost a decade later, the Bureau of Indian Affairs reviewed the Constitution and determined that none of the council members leading the colony met the criteria for tribal enrollment, and instead residents belonged to other tribes, such as the Ft. McDermitt Paiute Tribe. That decision threw the question of membership into legal turmoil. Though the majority of residents are Shoshone and/or Paiute, they cannot trace their ancestry back to the 1916 census.

When the eviction notices were first issued and demolitions began in the spring of 2020, Treva Hearne, an attorney representing the colony council, told The Nevada Independent that there are 33 legitimate colony members, but none of them live on the colony’s land. She said some members left after some violent incidents in the early to mid-2000s, and the cleanups are intended to increase economic development in the area and allow council members to move back to the reservation.

But residents question the legitimacy of a council whose members do not live on the colony, and the justice of ousting elders and their families who have lived there for decades, building community and establishing families with the expectation that their children and grandchildren would continue to have a home on the colony.

“My mother raised me here and I grew up here and all over, all around is family,” said Lovelle Brown, a resident of the colony.

By the time supporters arrived to help, Brown said council members had removed some skirting off her mobile home and severed her utility lines. The advocates who came in support helped her put the skirting back on her home and are working to reconnect her utilities, but it was too late for her to be able to stay in her home.

Brown has a health condition that requires her to have constant access to oxygen, so she’s had to leave the colony and stay with family elsewhere. Knowing that supporters are there and watching her house has been a huge relief, she said.

“When the land protectors got here, we were blocked in,” she said. “They had a fence around us with barbed wires around the top, like we're criminals.”

Some of the barbed wire is still up, including on the east of the colony where it borders a senior center, occasionally used by officers from the Bureau of Indian Affairs to check on the residents. There’s also a cement blockade at the entrance to the colony to the west, placed by the council.

Other than those two visual markers, the neighborhood is not much different from anywhere else in Winnemucca.

In January, the Bureau of Indian Affairs recognized the sitting council as legitimate, but residents argue that the BIA’s decision is arbitrary and are appealing the agency to review and change the decision.

Residents say the BIA has failed the community by approving councils that have been harmful to the people living there. Nevada Legal Services’ directing attorney Alexandra Rawlings, who helps represent some of the residents in the eviction cases, told The Nevada Independent nothing has been finalized.

“Our office is still in the midst of federal and tribal court litigation regarding the evictions at Winnemucca Indian Colony,” Rawlings said. “No final decisions have been made as of yet.”

In an emailed statement to The Nevada Independent, Hearne said the cleanups are needed to remove abandoned trailers and to address crime and drug use in the area. Residents have pushed back against those allegations as a ploy to get them out of their homes.

She added that the narrative of elders being displaced is a false one, repeated by members of the media unwilling to conduct in-depth research.

“The Colony Council has prevailed in being recognized as the Council and proper government of the Winnemucca Indian Colony,” Hearne wrote. “The trespassers, although claiming to be elders, for the most part are not … The Colony Council will continue its work and clear the persons from the Colony who refuse to leave.”

Within the last two days, a string of arrests at the colony resulted in three individuals charged with misdemeanors following encounters with BIA officers from Phoenix, Arizona, according to court documents obtained by The Nevada Independent after this story was published.

Attorneys familiar with the situation said the arrests included Teehwanee and another land protector for what they believe are traffic violations, though the exact charges are still unknown. Teehwanee could not be reached for comment. A daughter of one of the residents was also arrested for trespassing on the tribal council building grounds, according to Rawlings.

Complaints submitted to the court allege that the defendants hindered BIA officers from performing their duties and resisted arrest. During a Tuesday arraignment hearing attended by KUNR, a judge warned them not to return to the colony other than to gather their belongings.

Notably, none of the arrests involve residents and are focused on land protectors and other individuals on the colony lands. Rawlings said her office was not representing any of the individuals arrested but is monitoring the situation.

KUNR contacted Rachel Larson, superintendent of the Western Nevada office of the BIA, to clarify concerns stated by residents, but she declined to comment. The Department of Interior also did not respond to a request for comment.

Brian Melendez, a tribal community organizer in Nevada who used to work at the BIA, said that tensions have always existed between council members and residents, but those tensions have escalated in the last few years.

Melendez was there when the current council came into power. He remembers proposing ideas for the BIA to help the colony get up and running. He added the council did not have resources to begin with, contributing to conflicts between the council and residents.

As the bureaucracy of it all swirls between the tribe, the community and the bureau, he believes the tensions are part of a bigger story — one that uses resources and land scarcity to pit tribal communities against one another to the benefit of people and groups who aren’t Indigenous.

“At the core of these problems are non-tribal processes and regulations and regulatory elements that have historically subjugated tribal people,” he said. “While communities are stuck arguing over the few resources they have, they’re distracted from these bigger issues.”

Though the outcome of the court cases and appeals are uncertain, back at the colony, the elders have made moves of their own. They voted and appointed a group of matriarchs to form their own leadership.

There’s one key difference from those before — they all live in the colony.