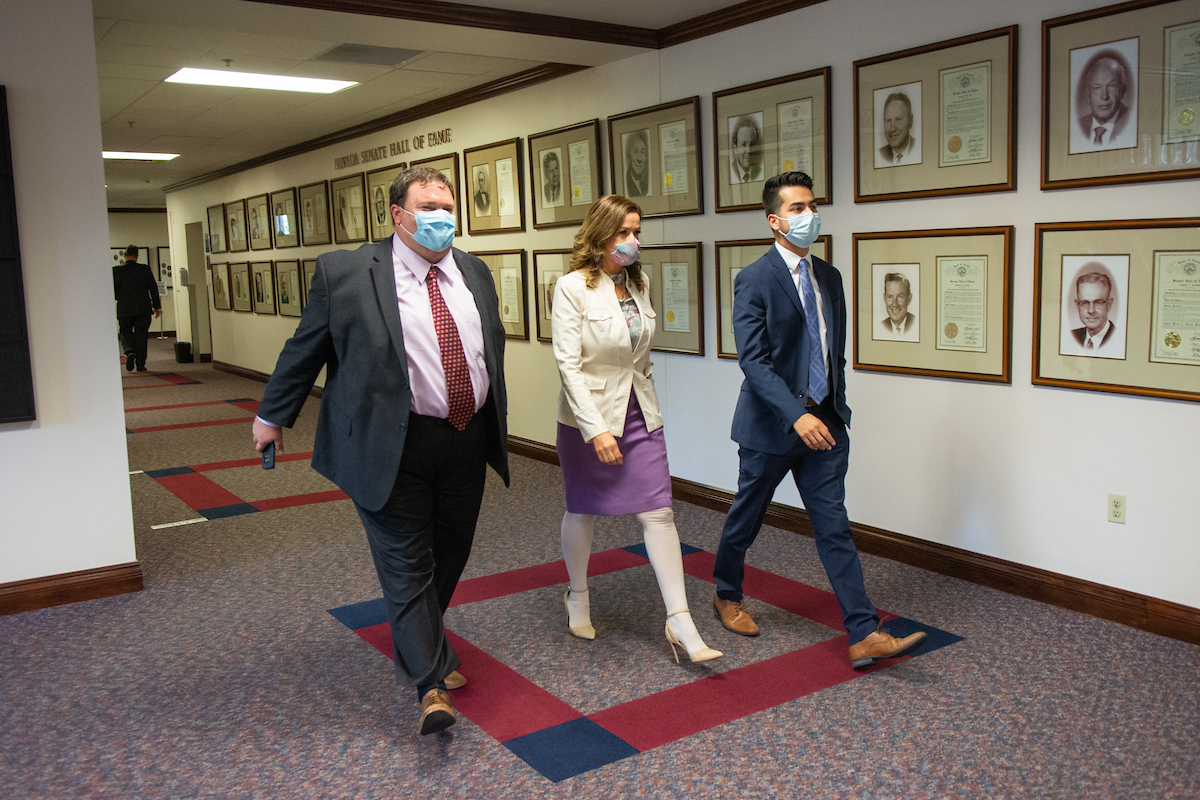 State legislators gaveled in to what’s likely to be a short and divisive special session on Friday, meeting to approve redrawn political maps expected to give Democrats a leg up in competitive congressional and legislative districts.

The special session, which is predicted to last at least five days, got off to a slow start — short floor sessions, a non-controversial hearing on revising Board of Regent districts, a brief procedural fight over rules and the swearing in of a new state senator, Don Tatro (R-Reno).

But a calm beginning is unlikely to beget a quiet ending — proposed maps by Democratic legislative leadership would shore up the party’s advantages in competitive congressional and legislative districts, but have spurred complaints and threats of litigation from legislative Republicans, who said in an email blast that the maps represented the majority party’s “egregious hyper-partisan political bias.”

The delayed redistricting process became necessary because of delays in compiling and transmitting U.S. Census Bureau data throughout the COVID-19 pandemic. The regular 2021 legislative session adjourned in early summer, well before census data was prepared and the redistricting process could start.

Democrats hold a clear upper hand during the special session, as approval of the maps only requires a simple majority and are likely to be signed by Gov. Steve Sisolak, a Democrat.

Maps released by Democratic leaders earlier this week would make all three of the congressional districts that include at least part of Clark County tilt toward Democrats — all would cover an area that President Joe Biden won by between 6 and 8 percentage points in 2020. They would also shore up numerous swingy legislative districts, all but ensuring continued Democratic control outside of Republican wave elections.

A hearing on SB1 — the bill setting new congressional and legislative boundaries — is expected to be held Saturday morning. In a brief interview, Assembly Speaker Jason Frierson declined to say whether possible changes to the maps were in the cards.

“Our goal is to have maps that reflect the community, and we're going to try to have a product at the end that does that,” he said. “We still have a hearing tomorrow.”

Here’s what happened during the first day of the special session.

Likely the least controversial item before lawmakers in the special session, AB1 would revise the district boundaries of the 13 elected members of the state’s Board of Regents, and allow a one-time delay in the filing period for judicial candidates for the 2022 election.

After the Legislature approves maps, election officials have a major task to define the new districts and new precincts. Jamie Rodriguez, a lobbyist for Washoe County, said the domino effect of the pandemic delaying the census and then the redistricting process would create a logistical hurdle for election offices if not for AB1.

“This would result in our election staff having to stop the process of redistricting to open up judicial candidate filing, and then go back to that after the filing period,” she said. “So with this one-time change, it’ll allow us to complete the entirety of the redistricting, and then do all filings at one time.”

Greg Ferraro, a lobbyist representing the state Supreme Court, said the effects would be minimal because relatively few judicial races are up in the 2022 election cycle — only 18 justice court and municipal court seats and one district court seat, compared to more than 90 district court seats up for election in 2024.

Emily Persaud-Zamora, representing the 22-member Nevadans Count Coalition focused on representing hard-to-count populations in the census and redistricting, said her organization supported the change because “we know our election heroes are already … overworked and we know that this extension would definitely help their teams.”

The proposal to redraw the 13 districts for the Board of Regents calls for five districts in Clark County to have majority non-white populations. Two of the districts have majority-Hispanic voting populations, whereas previous maps had districts with Hispanic majorities in the total population but not in the subset registered to vote, according to Nevada System of Higher Education (NSHE) General Counsel Joe Reynolds.

Kent Ervin of the Nevada Faculty Alliance said his organization had no position on the proposed boundaries, but that he appreciated that the maps appeared to comply with the Voting Rights Act.

“We appreciate the non-political and nonpartisan process that NSHE went through in establishing the new districts,” he said.

No one testified in opposition to the proposed new map.

Partisan disagreement struck even before any of the bills were introduced. In the Assembly, Republicans voted en masse against the proposed rules governing the special session, saying provisions requiring redistricting bills to move through smaller committees and not be heard by all lawmakers would limit their involvement.

“I feel that that totally disenfranchises the Republicans in this building and any other member frankly, regardless of what … party that person belongs to,” Assembly Minority Leader Robin Titus said on the Assembly floor.

Frierson quickly countered, saying that the rules were not “novel” and largely followed those put in place during the 2011 redistricting process.

Titus said the 2011 redistricting process — which ended with court-approved maps amid a stalemate between Democratic lawmakers and former Gov. Brian Sandoval, a Republican —  was not a model to emulate.

“Maybe if they'd had better engagement with the legislators, the governor wouldn’t have vetoed it and had it gone to court,” she said in an interview. “That wasn't a successful process.”

Using results from the 2020 presidential election, the Republican-proposed congressional districts 2 and 3 would have a roughly 10 percentage point lead over Democrats — essentially splitting the state’s U.S. House delegation. That’s in contrast to the Democrat-proposed congressional districts, which would have a safe Republican Northern Nevada district and three districts with a moderate advantage for Democrats.