Snowy sidewalks are inconvenient. For those with disabilities, they can be impassable 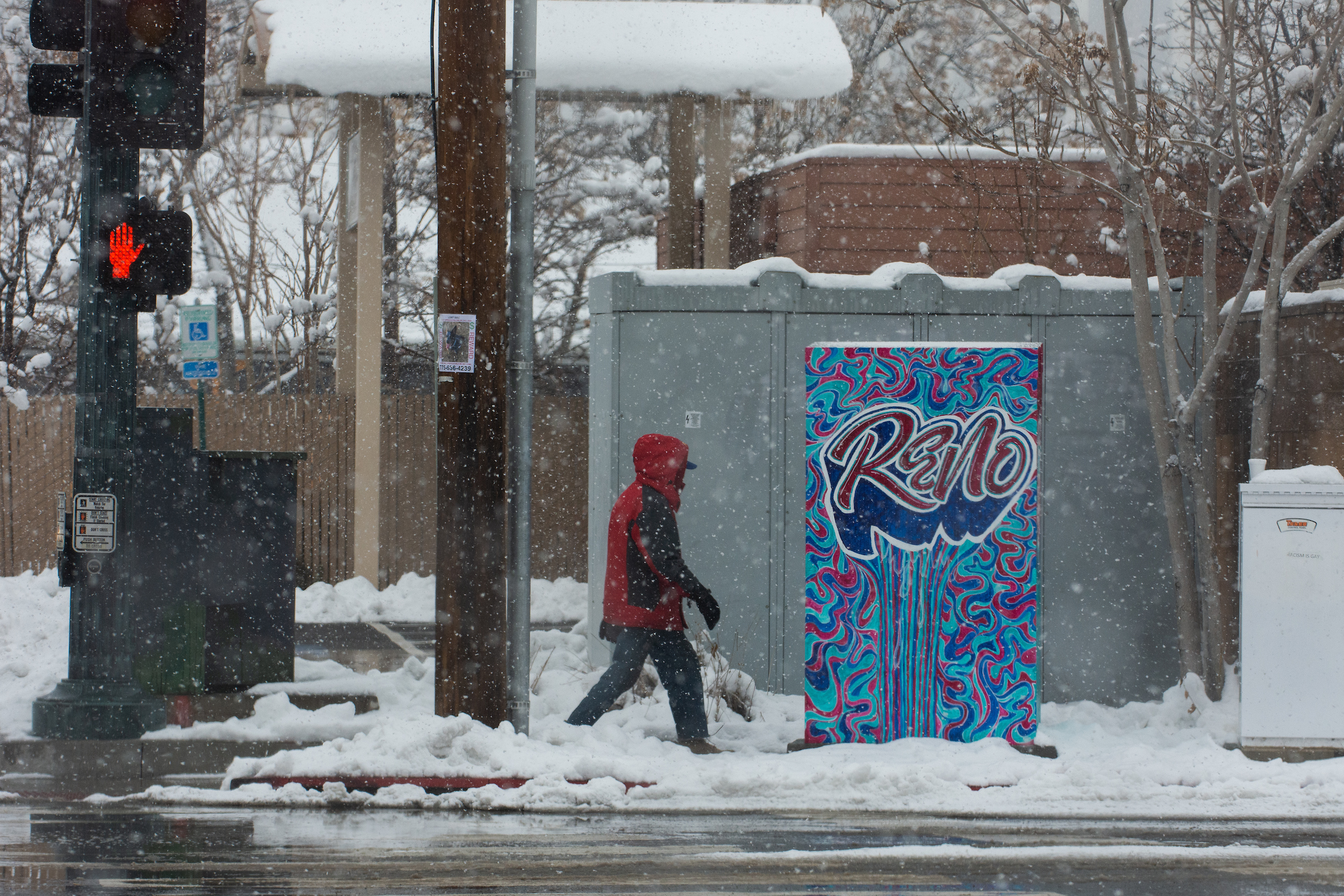 Getting from place to place in Northern Nevada is often complicated by winter weather. It’s not easy to dig out a car, put chains on tires, scrape the windows and then brave the snow with other drivers on slick roads.

People with disabilities often rely on walkways or buses for transportation, and when snow covers sidewalks or changes bus routes, it can prevent those who can’t drive from getting places.

Snow with a high moisture content, called “Sierra cement” by Eric Crump, operations director at Washoe County Community Services Department, can pile up on the sidewalk despite county snow removal workers’ best efforts. This heavy, wet snow — which Northern Nevada residents have seen plenty of in recent days — can become packed and icy, making it even slicker for those trekking on foot.

It’s also harder to plow. Typically, workers operating snowplows turn the blade, pushing the snow toward the center divider rather than onto sidewalks or driveways. But when snow is heavy with moisture, it peels off the blade and onto pedestrian paths, posing a challenge for people who rely on clear sidewalks.

Mark Tadder was diagnosed with retinitis pigmentosa — a rare, inherited degenerative eye disease that damages the retina — at 12 years old. After gradually losing his eyesight throughout his 30s and 40s, Tadder woke up one morning in 2014 blind. Now, as the president of the Nevada chapter of the National Federation of the Blind and the director of the blind and low vision program at the Northern Nevada Center for Independent Living, he helps other people with vision disabilities find resources such as housing, services and transportation.

“Once [vision loss] happens, it really impacts their living conditions which can affect everything from how long they live, and what kind of life they have,” Tadder told The Nevada Independent.

Though Tadder’s wife sometimes drives him, he often walks or takes the bus to where he needs to go. However, bus routes are confined to certain areas of town. When Tadder’s vision was beginning to deteriorate, he started looking for a new house to better suit his changing needs, eventually ending up in West Reno a few years ago.

“The real estate agent was trying to get us to live in Spanish Springs and I'm like, ‘nope, not gonna happen,’” Tadder said, referring to a community in unincorporated Washoe County that is about 25 minutes from downtown Reno. “There's no buses out there. There's no transportation whatsoever.”

RTC said it now offers rides for as little as $1 to $2 through FlexRIDE, which goes to outlying areas of Reno including Spanish Springs, Somersett and parts of the North Valleys.

Tadder said he often advises people he works with that have become blind to move closer to  services near downtown Reno if they can afford it. Living on the outskirts of Reno can limit what they can do and where they can find transportation. Tadder said there are also fewer sidewalks and less even ground farther from the city center.

Even if someone lives close to services, bus routes can change with the weather. When the Regional Transportation Commission (RTC) gets word there’s too much snow or ice on certain roads for a bus to safely travel, the regular bus routes are replaced with snow routes that take detours.

Lauren Ball with the RTC said for seniors, RTC has discounts on Uber and taxi rides. For those looking for rides that are more accessible to people with disabilities rather than catered specifically to seniors, RTC ACCESS provides door-to-door paratransit, which is Americans with Disabilities Act-compliant transportation.

Because the Washoe County Community Services Department tries to make sure buses are running on time, Crump said, bus routes are one of the first priorities for plowing.

However, clearing snow from sidewalks is the property owner’s responsibility, not city workers’. Crump advised residents to be sure to shovel snow onto their property rather than into the street to avoid the snow either being plowed back onto sidewalks or being compacted to ice on the streets.

Tadder takes extra precautions in his neighborhood by letting residents know he needs the sidewalks clear.

“In my neighborhood, they all clean their sidewalks because I will talk to them about that,” Tadder said. He also uses microspikes on his shoes to add traction when it is icy.

Tadder considers himself lucky to be able to walk. People who use wheelchairs face further complications.

“If you're in a wheelchair … and you need to use that sidewalk, that can be impossible to traverse in an icy or snowy situation,” Tadder said.

Though Tadder praised the RTC and Reno government for their efforts to make the city more accessible, specifically by expanding the sidewalks in Midtown, there’s still a long way to go to make the city accessible for those with disabilities.

“It doesn't matter to the people who can drive. They don't care. They don't even notice if you ask them. ‘Do you have a sidewalk along your drive home?’ And people invariably will tell me ‘I don't know,’” Tadder said. “But if you can't drive … you'll find out right away how frightening that path is.”

This story was updated at 10:15 a.m. on 1/23/23 to add details about bus service to outlying communities in Washoe County.