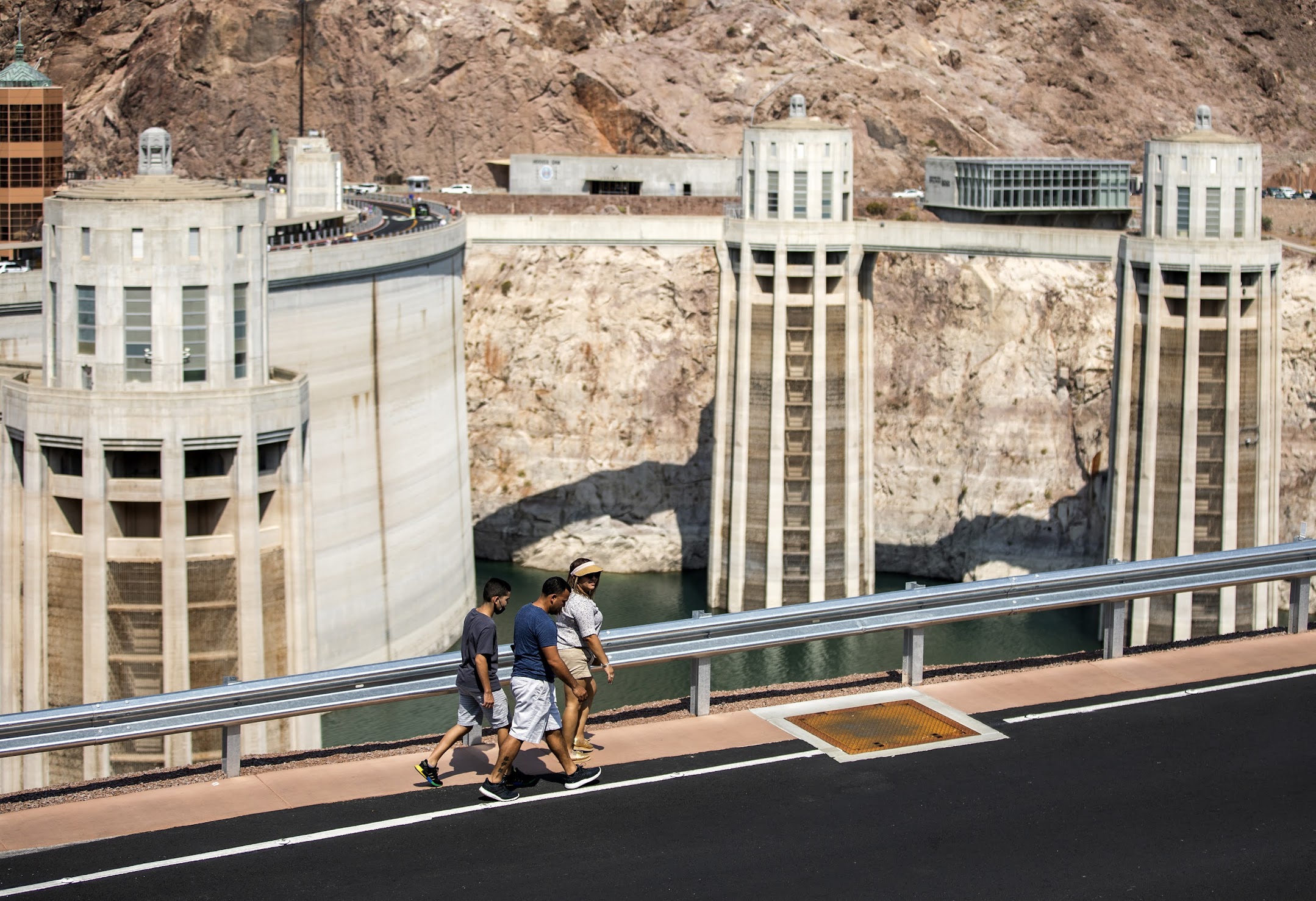 Harris argued that the infrastructure bill — passed by the Senate in August — and the Democratic agenda package, known as the Build Back Better Act, will help make lasting changes when it comes to mitigating drought. The two pieces of legislation, she said, pave a way forward for the nation on policies such as water recycling and reuse, water desalination and drought contingency plans.

Harris said the passage of the bills could help change the current trajectory and pointed to the lake's water level, which is as low as it has ever been. Rings along the perimeter of the lake show the steady decline of the water level, which has dropped 140 feet since 2000, the last year it was considered full. The decline is roughly equivalent to the height of the Statue of Liberty.

“It is critical that we, as a nation, understand that we have within our hands, within our possession, the ability to actually change the course of where we're headed,” Harris said in a short speech at Lake Mead. “Just look out at this lake. Look at where the water has receded over just the last 20 years ... This is where we're headed.”

The visit follows the first-ever federal “shortage declaration” on the Colorado River this summer, which triggered mandatory cuts for Mexico, Arizona and Nevada that will start next year, though states have been preparing for those cuts for years. The cuts are tied to the level of Lake Mead, based on a projection released each August.

In Nevada, the shortage declaration will not affect day-to-day water use, though current and former Las Vegas water officials have stressed that the situation on the Colorado River is a serious one for the entire Southwest. The river accounts for about 90 percent of Southern Nevada’s drinking water.

Harris was also briefed by officials with the Department of the Interior, including the Bureau of Reclamation, National Park Service, Southern Nevada Water Authority and Clark County Parks and Recreation on Monday.

An essential resource for the state and region, the lake provides water to 25 million people in Nevada, Arizona, California and Mexico. Releases from the Hoover Dam also power hydroelectric facilities that serve the region.

Harris was joined on Monday by Rep. Dina Titus (D-NV), Rep. Steven Horsford (D-NV) and Rep. Susie Lee (D-NV), who all urged Congress to act on both bills.

“This is our moment,” Titus said. “You hear the existential argument, look around at this bathtub ring. It's very clear.”

During the briefing, Horsford pointed to an area where he fished with his children and brother-in-law, a spot that is now more difficult to reach because of the lower lake level.He also noted that reduced boating and fishing have hurt Nevada’s economy.

"Climate change is not a partisan issue," Horsford said. "This is an issue that Democrats, Republicans and independents understand must be addressed and now is the time for us to act."

Lee highlighted a provision she managed to get into the infrastructure package to create a grant program for large-scale water recycling projects in Nevada and the other 16 Western states.

“Climate change is not tomorrow, it's today,” Lee said. “And when you look at the ring here, like me, we all understand far too well what it means.”

The Senate approved the infrastructure package in the summer, but it has stalled in the House while Democrats have argued over what to include in the Build Back Better Act.

After forcing progressive Democrats, including Sen. Bernie Sanders (I-VT), to reduce the cost of the package from $3 trillion to something closer to $2 trillion, Sen. Joe Manchin (D-WV) — who represents the coal-rich state of West Virginia — has raised concerns about the legislation’s climate provisions, including a measure that would pay utilities to transition to more renewable energy and punish those that don’t in order to reduce emissions.

Manchin's approval is crucial to passing the agenda bill. While Senate Democrats plan to use the budget reconciliation process to pass the measure, allowing them to avoid a GOP filibuster and pass the legislation with a simple majority vote, they can’t afford to lose even one caucus member on the vote as the Senate is split 50-50 between the parties.

The situation isn’t much better in the House, where Democrats can only afford to lose three votes and still pass the legislation.

Congressional Democratic leaders, led by Speaker Nancy Pelosi (D-CA) and Senate Majority Leader Chuck Schumer (D-NY), hope to resolve any issues with the Build Back Better Act by the end of the month. But Manchin told reporters on Monday he doesn’t believe that is possible.